Most of the time Zander is making everyone laugh with his GINORMOUS personality. He does and says some of the most funny things. I love him to death!!

But we do have other times that are challenging. I suppose parenting isn't always suppose to easy. Zander reminds me of that some times.

This past week Zander was sent to the principles office.
All of Zander's classmates think he is so funny. His teacher has mentioned several times that others really look up to him. Not only can he make others laugh but he is a friend to everyone. Those are some really good qualities... especially for a 6 year old. But the other day Zander was getting frustrated at a girl who "wasn't being very nice." Zander knows he isn't allowed to do mean things to other people, so instead.... he asked his little friend to be mean to this girl. Zander told his little friend to pull the mean girl's hair. The little friend did what Zander told him to do, and did indeed, pull the girl's hair. The girl defended herself and she punched the little friend in the stomach. The little friend cried immediately and the girl and little friend started hitting each other back. Meanwhile, Zander just sat back and watched it all happen.

All three of them got sent to the principles office. As a result, they all lost their recess for two days. They had to sit in the office and "think" about how they could have each responded better.

Now, I realize the little friend didn't have to do what Zander told him to do..... but, I do see how sneaky Zander can be in getting what he wants. Not good!

Zander lost his privileges at home as well for the rest of the day. He wrote sorry notes to the girl and boy. I really hoped he learned something. 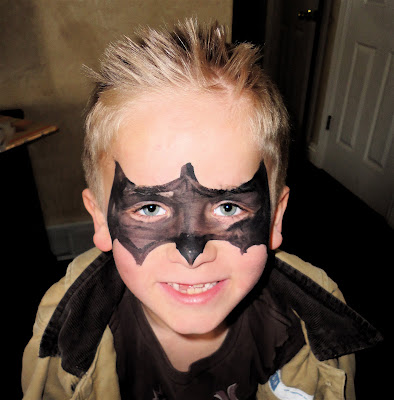 On a brighter note.... this little picture is more of our FUN Zander! He really is a good boy and lots of fun to be with. And... he really can brighten my day with his love and excitement for life!
Posted by Amy at 6:11 PM