Ever had a bad day? 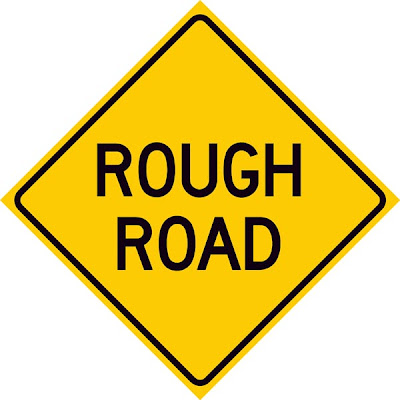 I had my first real bad day of the year. I guess it was bound to happen sometime this year....

It was actually a bad 24 hours.

Started off when a deer ran into my beautiful Sequoia. When I say she ran into me.... that is the honest truth. She charged right to the side of my car. It was real dark and I was driving towards my house. There were mountains on both sides of me. Out of no where a deer just charges out. I only saw the animal, and she saw me, right as she smashed into my door. Then, she slide right through to the passengers side and wrecked that door too. The animal had no saving grace with hitting with such force. She died right in the middle of the road. I was all by myself, so I just left her there. There was no way I could have moved the deer, nor did I want too. I would have got hit myself. Anyway.... super frustrating! Deer hits are not cheap!!

Oh... and throughout this story, keep in mind that Niel was out of town on business this entire time.

The very next day I got up and got the kids up. Stockton started telling me that his stomach really hurt. Stocks is hardly ever sick so I tend to believe him when he is. He roamed around the house and tried to go about his morning routine, but it was pretty obvious he was going to have to stay home for the day. It stresses me out to leave him home sick and I have to go to work. But he assured me he would be fine and would keep the phone near him at all times.... still, stressful.

During my lunch hour I had to take the car into the claims adjuster. I was given the address but no instructions. Usually I can find addresses pretty well so I wasn't too worried about it. While driving to find the adjuster I made a wrong turn. As soon as I made the turn I realized I was going the wrong way.... so attempted to re-adjust myself and get back onto the correct road. I guess I should say I quickly re-adjusted myself. A cop was sitting right there and I realized his presence a little too late. He pulled me over for going 8 over the limit. I tried to tell him what an awful day I was having but he didn't really seem to care.

As I was sitting in the car waiting for him to write me up I received a phone call. I didn't recognize the number so I let it go to voicemail. Once the officer let me go I checked my voicemail. It was the principle of Conner's school. He was calling to tell me that Conner was in his office!! My first response was to freak out.... I mean really? Conner has never gotten himself into trouble. But as I listened to the message he explained that Tylenol was found in his locker. The principle went on to say that any type of over the counter medication was not permitted in the school and that if Conner needed anything for a headache he would need to come into the office and get some. He also said that Conner had told him I had given him the Tylenol, which was true, and so they were going to let him go, but wanted to let me know of the rules. Sheesh!!!!! Later I found out that Conner got a kick out of the entire thing and couldn't believe he got sniffed out by the dogs...haha!

I got home and had this great plan to take the boys bowling. But as I walked into the door it was pretty evident that Stocks wasn't going to make it. He was so sick. Zander lied to me when I asked him if he had his homework done. Since he got caught lying I figured I couldn't possibly take him bowling. When I told Zander we weren't going bowling he totally lost it. He threw a complete, crazy, outragous temper tantrum. Seriously? Do six year old's throw temper tantrums?? He cried and cried. He kicked, yelled, screamed and I thought for a second his head was going to pop right off.... mostly because I felt like mine could have.

In the end, I took Gar and Conner out to get a burritto. Zander cried the entire time. Oh... and Stocks threw up.

So... after I tucked all the kids into bed, and before I could melt away in my own bed, I had to clean up the throw up that was smooshed all over the carpet. I love my children so much! But cleaning up puke is about the most disgusting parent job in the entire world. I thought I wasn't going to make it.... but I did.

I was overjoyed to crawl into bed and pray that the next day would be better.

I love reading about other peoples bad days. it makes my day sound better and it helps me to remember my bad days and how I some how lived even though I didnt think I was going to at the time. Sun Shine your way. Jen

I love reading about other people's bad days too, just like the above comment stated. I hate that snowball spiraling of bad stuff that just kept happening to you. And the throw up....oh yes, disgusting.

I love your family. Keep up the good work Amy!!

Sorry you had a bad day!! And as for the puke ... you can call me next time. Puke clean up is a regular part of my routine (at home and work). Thank goodness for good days!

Oh man, that does sound challenging. The deer part reminds me of one of the episodes on my favorite shows. (Gilmore Girls) Glad the bad day went away!