Guess who is coming home? 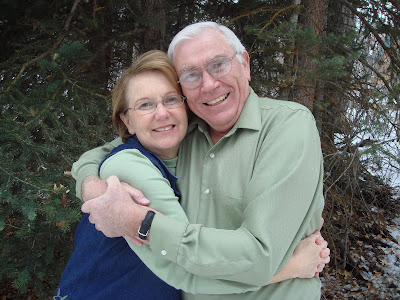 John and Joyce - November 2006
I tried to find the first picture I took of Grandma and Grandpa J. Guess what? I cannot find it... so instead, I am going to just have to tell you about the first time we met.

December 31st, 2004 was the first time I met two people who would change my life, and the lives of my little boys, forever. It was New Year's Eve and Niel had asked his family if me and Zander could join them up at their cabin for the holiday (the boys were with their Dad). I was slightly nervous to met them, but so excited to spend New Years with a friend and meet some new people. Zander and I kind of felt like we were imposing a little, but John and Joyce said we could stay the night and not just spend New Years Eve, but also New Years Day at their cabin. Wow! What a special treat.

John and Joyce were SO kind to us. They treated me and Zander as if we had all been long time friends. We felt extremely comfortable. We also had so much fun! We played games, ate tons of food, talked, rested, played in the snow, rode four wheelers, and had the time of our live!! Zander was only 9 months old at the time. He was so curious in a new place. He barely slept. He did the regular baby things, like cry, and crawl. John and Joyce played with him and even took care of him a little so I could have some fun. Zander was pretty content being with them which was unusual for him at that age. I was so grateful for their hospitality! As we departed to go back home I hoped I would get to see them again and get to know them.

Who knew they would get stuck with me and four crazy boys....haha!

Later, when Niel and I were getting ready to be married, a co-worker said to me, "Marriage is so hard at times. I hope you like his parents." Then he chuckled to himself. I didn't even hesitate to answer his statement, "Actually, I love my soon-to-be inlaws. They are almost as great as Niel!"

John and Joyce have blessed our lives in so many ways. I have felt their love over the past 18 months while they have been in Russia serving the Lord. The people in Russia are going to miss two incredible missionaries.

I am SO excited they are coming home! I have missed them SO much!!!

Look what they have been doing the last little while... 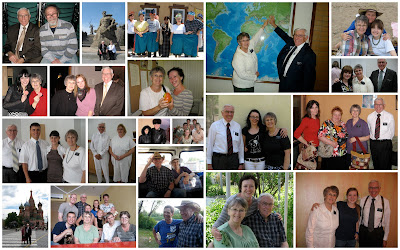 I love your in-laws, too! See you, and them, soon!