Did you know that pens, pencils, and a straw.... 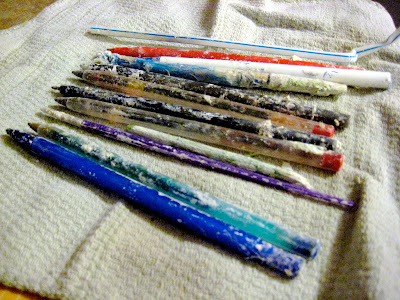 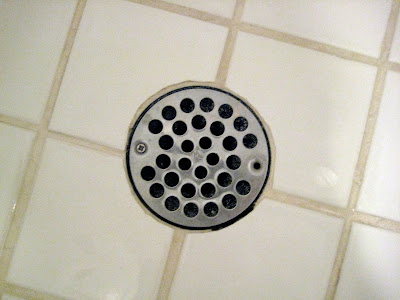 The past couple of days Niel and I noticed the water in our shower starting to pool up and not going down the drain like it is suppose to. Niel decided to be Mr. Plumber (minus the crack of course)!

As he started digging he found a pen and then a pencil. He kept digging down the drain because he saw many more pens and pencil.... and even a straw. Seems like "not me" has stuck our shower drain. When we asked the kids who did it we couldn't get anyone to confess. Niel then told the boys that if who ever did this would just come forward, no one would get in trouble... BUT (and there is a but in here), if no one came forward with the truth, everyone would have to go to bed early every night until we found out who it was. You would think this tactic would work.... right? Nope! As soon as Niel said no one would really get in trouble, all the boys confessed to do the pen drop. Each one said they really didn't do it but none of them wanted to go to bed early.

So, we are back at square one....haha! At least the drain is draining now. Hopefully "not me" will stay out of trouble for a little while.
Posted by Amy at 10:35 PM

Grandpa laughed out loud at that one. We both have the same opinion as to who "not me' is.

Ha! Those little round holes are just so tempting! So funny!!

That is one of the funniest things I have heard- I'm going to have to share that one with my mom and sister- they will crack up.

i didn't do it! Do you believe me? That is hilarious!! Who knows, maybe the family before you put the pens, straw, and pencils in the holes. Your kids could be telling the truth.

Haha he told this story at work and thought that maybe I knew who had done it. I assure you that I had no idea that this was going on while I was supervising haha!!!!

"Not me" lives at my house too. How did that happen?

I put the straw in, I thought the water would run right through it. I SWEAR I DIDN'T PUT ANY PENS IN, but can I still go to bed early? Please?