Garrett is such a good boy. He always does what he is told to do. As he was getting tucked into bed, getting ready to rest his merry head and dream of sugar plums, I told him not to get out of bed and try to sneak a peak of Santa. I told all the kids it would be unfair if any of them saw any of the presents before their brothers or sister. I told them to stay in bed until we could all go up together and share in the Christmas Day fun.

So, sweet little Garrett did exactly as he was told. In the middle of the night, he got sick. He threw up in the bathroom, not making it to the toilet. Because he had been told not to go upstairs, he stayed downstairs. And being since he is such a good boy, he cleaned up all the throw up! Yes... all of it. Then he crawled back in bed. He got sick again and ran to the toilet. This time, he made it in time. Yet again, he went right back to bed and didn't go upstairs to wake me up.... because he was told to stay downstairs.

I want to say he is such a good boy, and he is.... but I felt SO TERRIBLE he didn't come wake me up so I could help him. Talk about an obedient, independent, clean 7 year old. My heart just sank that he cleaned it all up.... he didn't even leave a mark. I seriously almost didn't believe him when he told me what happened. There wasn't a trace of evidence.

By morning he was all happy and ready to see what Santa had left him. I think Garrett hit top of Santa's Nice list this year. He definitely was a good boy.... all year long! 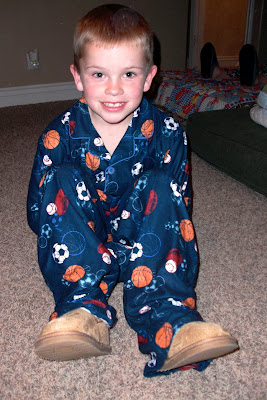 All the kids sleep downstairs together. It is a tradition. They love it! 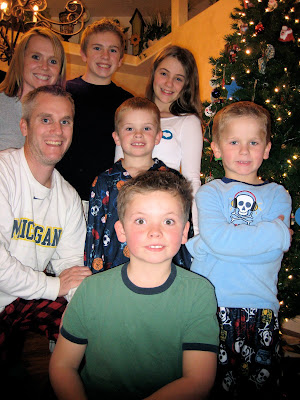 Oh Amy, what a sweet, yet sad story! I had to share this one with my husband, it was just too great.

I thought that was so cute when I read it on Garrett's blog. What a sweetheart!