Garrett's team had made some incredible progress this year. Their year started a little rough, but they learned and improved. Going into the play-off's they were rated 3rd. It has been so much fun to watch them this season.

Garrett had to play in 2 playoff games. The first game had to be rescheduled at half time because it was pouring rain and hail on the boys. As the half ended, Lonepeak was a head 14-0. They finished up the game in much better weather, with a score of 30 - 6! The game was fantastic!! Garrett scored 2 of the 4 touchdowns. He had one 2 point run in for extra points and also a completed pass for another one of their extra points. One more thing.... yes, there is still more.... he won MVP. He was thrilled!!

The second game was played in horribly cold, dark weather. This game was so intense because the winner would go onto the Superbowl! The boys all played hard.... the fans cheered extra loud.... and guess what?

LONEPEAK WON!
Score 12 - 7
Garrett scored both touchdowns. He played like an animal on defense!!

Conner took all these pictures for me. He did an amazing job! Looks like we have a photographer in the family afterall! :) 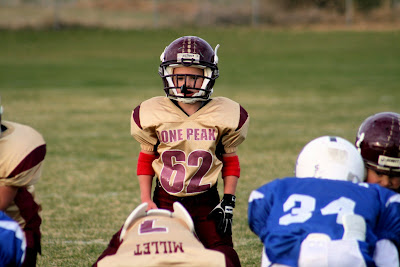 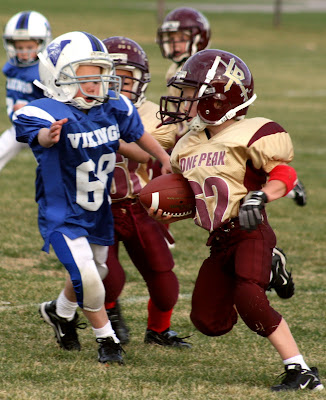 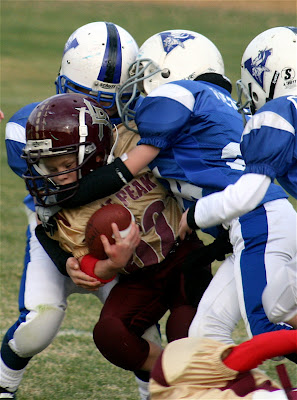 Garrett puts every ounce of himself into the games. He can juke, spin, run hard, and tackle. He has such a sense for the game. He even got an interception! 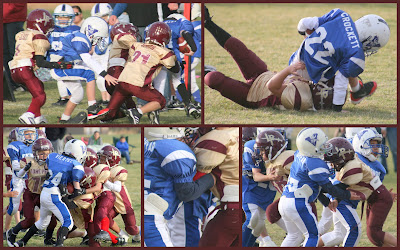 Now it's off the the Championship game. GO KNIGHTS!
Posted by Amy at 10:29 PM

It was a wild game. As I went from spot to spot along the sidelines I heard several different comments saying, "That little Garrett is just a tiger out there" I did not want to overly brag but it sure made me smile. Looking forward to Saturdays games.

Good job to all your boys! -and awesome pictures, Conner!