I am in BIG Trouble! 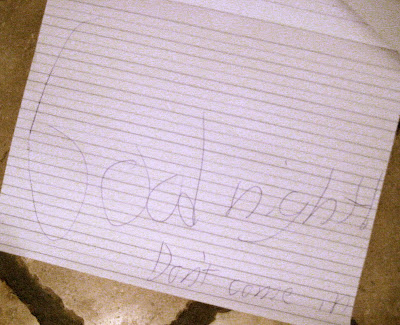 Stocky went be to bed very upset the other night. This was the nice note he felt me in front of his door. It reads:

This is very surprising for Stocky because he is such a sweet, gentle, forgiving child. I even felt bad for what happened after I found this when I came into his room to tuck him in.

Earlier that evening Stockton realized he had lost $10. The thing was, Niel and I knew he had lost his precious $10 two weeks earlier. Niel had found the money laying on the floor. Stockton is such a free spirit and so carefree he leaves stuff all over the house quit often. Of course this $10 was worth far more value to him than his church shoes or pad of paper. I thought it would be a great opportunity to teach Stockton a lesson. When Niel found the money I told him to keep it.

I thought for sure Stockton had completely forgotten he even had misplaced the money because it took him so long to ask about it. But when he did, and when I told him the money had been long spent, he was so sad. Stockton felt like this was so unjust and that if he had found $10 laying around he would have announced to the household and not kept the money for himself. While I completely agree with his logic, I also agree with mine that he can't leave things hanging around the house.

Needless to say I didn't give him his money back. Hence the reason for the note!

Not sure if he learned any type of lesson other than he has a really mean mom who likes to take money.

We taught a lesson just last week on applying logical consequences. This was a perfect example, we could have used in our class. Our vote:
(since this is not just a one time case)...you did the right thing and can use it in the future..."remember what happened when you left your $10 lying around?"
Loved the note!!

I am a softy and new to parenting, so I am probably the wrong person to ask. But this story made my heart sink! I would probably try to find a way to let him earn the money back, so then maybe the lesson could be learned, and he could get it back eventually. But once again, I am a softy with no experience raising children! And I will probably create a monster out of Ruthie! :)

Maybe I would have given him the money if it was the first time losing it. However, if it happened again, I would keep the money.

These decisions are hard because you want to teach life lessons...if you lose money on the street, more than likely someone isn't going to pick it up and yell, "Is this money anyones?"

I agree this is a tough call, with no right answer, just an opportunity to teach.

What I would do: Stick to your guns and let him know that 10 dollars is gone. It just shows that you are serious, and fed up with him leaving stuff around.

However, you never know what he may have wanted to spend that money on, and to make yourself not feel as guilty I think it is fine to provide him with a few opportunities in the next week to earn some money! BUT I wouldn't introduce it to him by saying, "Do you want to earn that ten dollars back?" Because that "ten dollars" is gone, and you already established that.

Rather, just say for example, "Hey Stockton, I have an abnormal task that I want someone to do. I wouldn't normally ask you to do, but if you do it I'll pay you" Then if he agrees, he'll earn some money (and I'll bet you as soon as you hand him some dollar bills, he'll hide it away as fast as he can).

If he declines your job offer, than he obviously doesn't care too much about the money. (which is fine, and he can go on his merry way).

Anyway, I'm curious to hear the end of this story.

I love the note and sometimes that kind of note means you did the right thing. He'll always remember it and you can always use it as an object lesson. I totally think you should let him earn it back.

Save the note. It will mean a lot to nim in the future. I have a plaque hanging on my kitchen wall the proudly proclaims me to the world as the meanest mom. It's okay. After awhile when your kids turn out wonderful you can claim (rightly so) that it is because you were so "mean". The plaque ends by saying that what the world needs is more mean mothers and fathers. It's tough, but you did the right thing.