Garrett just finished up his baseball season (he posted on his blog). This year he played coach pitch.... he is quit the little baseball player.
In one play.... we got 3 kids out! He is so fast.... faster then most kids. Let me explain the 3 out play. The kid hit the ball... it bounced right to Garrett who was standing between 1st and 2nd base. The kid who was on 1st starting running to 2nd... Garrett tagged him. Then Garrett ran to 1st base and got the hitter out. Then.... we ran directly to home and got the 2nd base runner (who was attempting to run home).

Way to go Garrett! He was an aggressive little player. We had to remind him he was playing baseball and not tackle football. Often times his little feet would be running so fast.... we would run into the players we had trying to tag out!!
It was a great season!!! 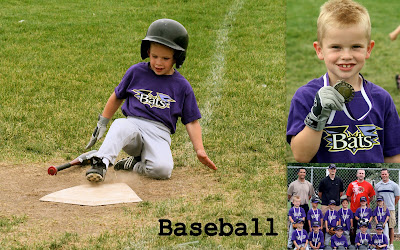 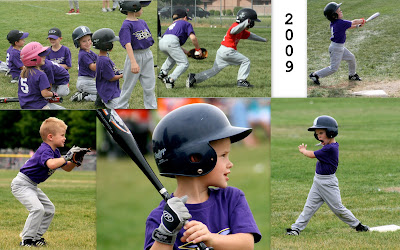 Way to go G! I can't believe how big you are getting! I know that you just love that you are growing up. You are a handsome, athletic boy and a very good boy too! Bryn and I miss seing you weekly. We love you Gar!